The school has had a wonderful few days of celebrating 60 years of its existence. Originally built as a Secondary School, opening in 1957, and converting over the years to a Middle School and finally into our thriving Primary School.

It was with great pleasure that on Friday we were able to welcome some of the previous staff and pupils. Mr Pyatt (front right) was a young teacher of 21 at the school on its first day. He taught woodwork here for around 25 years. He was on familiar ground in the old woodwork room, now Mr Mason’s workshop, finding some of his old tools still in a cupboard under his old workbench! Mrs Sellers (front row, 3rd from left) was a cookery teacher in the early days for more than 18 years. Previous headteacher, Mr Beckett (front row, 4th from left) had some tales to regale and Mrs Johnson (front row, far left) worked in the busy office for many years. They were also joined by some past pupils, several being in the school on its first day of opening. We also welcomed some members from the Waterhouses luncheon club who told of their time in the school. They had a tour of the school and many memories where shared with the pupils.

Each class had a display of their decade of learning from the week and in the morning assembly the children proudly presented their research.

It was a lovely day. A big thank you to Kayleigh Carr who made and decorated the wonderful cake, Mrs Andrew for the tasty lunch from the past, Miss Hall for the technology for taking the 60-shape photo, Ms Distin for refreshing the dining hall’s floral table arrangements and to all the staff for their enthusiasm and ideas. 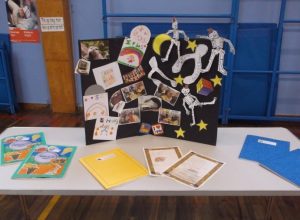 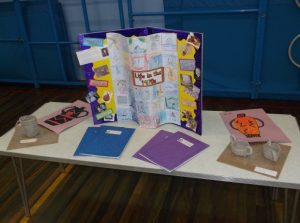 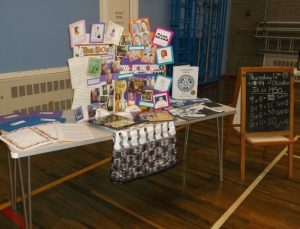 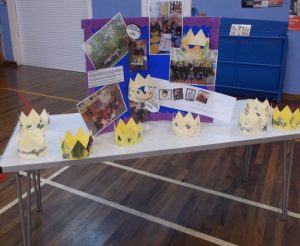 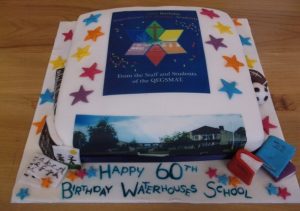 Anne Martin, Executive Headteacher of QEGSMAT, has been elected to the East Midlands and the Humber Headteacher Board.

The names of 32 academy leaders elected to help shape the future of schools in their local areas, were announced by the Department for Education in October. The leaders – who were elected by their peers across the country – were chosen because they have the right experience and local knowledge to take on this important role. They will each join one of the eight regional Headteacher Boards across England. The boards provide support to the Regional Schools Commissioners in those areas as they work to provide effective oversight of local schools and advise the National Schools Commissioner, Sir David Carter and the government.

Parliamentary Under Secretary of State for the School System, Sir Theodore Agnew, said: “Headteacher Boards have already shown they can provide invaluable support in improving the education of pupils across England and I’d like to thank everyone who has played an important role so far.

“The local expertise and wisdom of the newly elected members will be vital in helping schools continue to flourish and I look forward to working with them in my new role.”

The newly elected members will build on the successes of the previous Headteacher Boards, which have been in place since July 2014 when the role of Regional Schools Commissioner was created. The Headteacher Boards have already helped a growing number of academies to share expertise with neighbouring schools and within multi-academy trusts, driving improvement for thousands of pupils.

Two additional board members will be appointed by each Regional Schools Commissioner, and the board will be able to appoint further members to fill skills or expertise gaps in the future. Those elected to Headteacher Boards do not have decision-making powers, but provide local expertise to inform the decisions of National and Regional Schools Commissioners and ministers.

National Schools Commissioner, Sir David Carter, said: “Over the last three years the expertise of Headteacher Boards has been so important in helping to create a self-managing and ever-improving education system.

“I know from personal experience how much Headteacher Boards help inform decisions and I’m looking forward to working with the newly-elected members to help make our school system even better.”